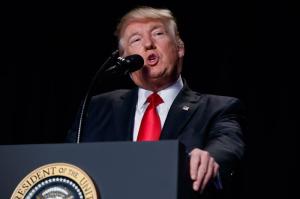 “We will not allow a beachhead of intolerance to spread in our nation.”

So said Donald Trump on February 2, 2017 to a public audience at the National Prayer Breakfast.

Mr. Trump, cut the crap. There is already a well-established, well-fortified beachhead of intolerance in your nation — it has been supported, encouraged, and rewarded by you and the people you have hired to develop and implement your agenda. Intolerance? It starts at the White House.

Breitbart is only one of many right-wing media outlets, but holds a central position in establishing and growing the beachhead. Steve Bannon has described Breitbart as “a platform for the alt-right,” which almost guarantees a position as a base for spreading intolerance.

Breitbart is undeniably inflammatory. It delights in being a provocateur, gleefully riling up a readership eager for news, true or not, of the latest outrage against white middle-American males. As the New York Times has commented, to scroll through Breitbart’s headlines is to come upon a parallel universe where black people do nothing but commit crimes, immigrants rape native-born daughters and feminists want to castrate men. If the Times rewrote the comment today, the parallel universe would also include Muslims interested in nothing but world domination, and Donald Trump as the guardian of truth.

Breitbart stops short of incitement in the legal sense, but delights in its role of stoking anger among disaffected right wing Americans. Steve Bannon has acknowledged that what he tried to do with Breitbart was to reach an audience (disaffected extremists) that did not have an outlet in mainstream media. He gave that audience “a perspective that other outlets are not going to give.” However, in giving disaffected extremists a platform, Bannon and Breitbart fuel the most intolerant right-wing views. Bannon has confirmed his intention to foster extremism among Breitbart’s readers— in an email to a colleague dismissing congressional republican leaders, he said “let the grass roots turn on the hate.”

The grass roots have indeed turned on the hate. Here’s a sample of comments (as published) from just a brief stroll through Breitbart.com:

Re: Disney Head Bob Iger, who declined to participate in a Trump business council:

Re: Comcast, who organized a company protest against immigration policies:

In many other countries, some of these comments would be banned as hate speech (i.e. extreme intolerance). In the U.S., free speech is paramount, so the comments are allowed. So be it — it’s one of the strengths of the US democracy. There’s a big difference, however, between allowing intolerant views to be expressed, and actively encouraging those views and rewarding the person who built the platform for those views with a senior advisory position in the White House.

And what about Milo?

Breitbart employs one Milo Yiannopoulos, who was in the news recently when his speaking engagement at U.C. Berkeley was cancelled. It seems that Yiannopoulos’ penchant for stretching the limits of acceptable free speech was not viewed too kindly by certain groups in the Berkeley community. The protests turned violent; the engagement was cancelled. Cue a Twitter rant from the president suggesting that Berkeley should lose federal funds as it “does not allow free speech and practices violence on innocent people with a different point of view.”

A different point of view? Regardless of one’s opinion about the necessity of free speech and its value in a free society, most would admit that Yiannopoulos was not at Berkeley to offer “a different point of view.” He was there to do what he does best — to provoke an angry response. He’s well-qualified to do that — his background includes the usual right-wing attacks on liberals, but also attacks on various religious groups, races, nationalities, and sexualities. He hounded the actress Leslie Jones from Twitter with a series of outrageously racist and cruel tweets, and earned himself a lifetime ban from Twitter as a result. His views are so extreme, he was barred from speaking at his former high school after an intervention by the U.K. Government’s anti-extremist unit.