While you’ve made your reputation as an internationally-renowned cartoonist, whose Dilbert characters have entertained millions (including me) over more than 25 years, you’ve now thrown your voice into the discussion about anthropogenic (i.e. man-made) climate change.  It’s not going well.  Your positions seem to be ever-changing, eager to latch onto red herrings, politically-driven arguments, and “alternative facts.”  Scott Adams’ Blog now appears to reflect skepticism of the science and the scientists’ ability to form conclusions based on the science – so much so that the blogs are now being quoted by true climate science deniers to support their arguments.   I’m writing this to try and get you back on track, out of the clutches of a very powerful, very manipulative climate science denial industry. And, to have you focus more on Dilbert and Wally.

Does that cover it?  In short, you’ve:

In the interest of space, I’ll just focus on your concerns about the skeptics.  After all, you say that your information comes from strangers that tell you their interpretation of what the scientists are saying.  Let’s look at the people who obviously have your skeptical ear.

Skeptics & deniers: who are these guys?

Scott, in saying that skeptics are just looking for “science to make its case” you are being hopelessly naïve.  Sorry, but there’s no other way of saying it.  Let me try to explain the industry of denial by pointing out some facts about the people doing the denying – those who the politicians go to when they want to advance a position that “the science isn’t settled.”

The people in the table below are prime climate change deniers – ones who have actively promoted such easily-debunked ideas as:

They are the “go-to” guys for those who want to add some weight to otherwise unsupportable positions on climate inaction.  For brevity, I’ve limited the list to those who show up multiple times within the following groups: 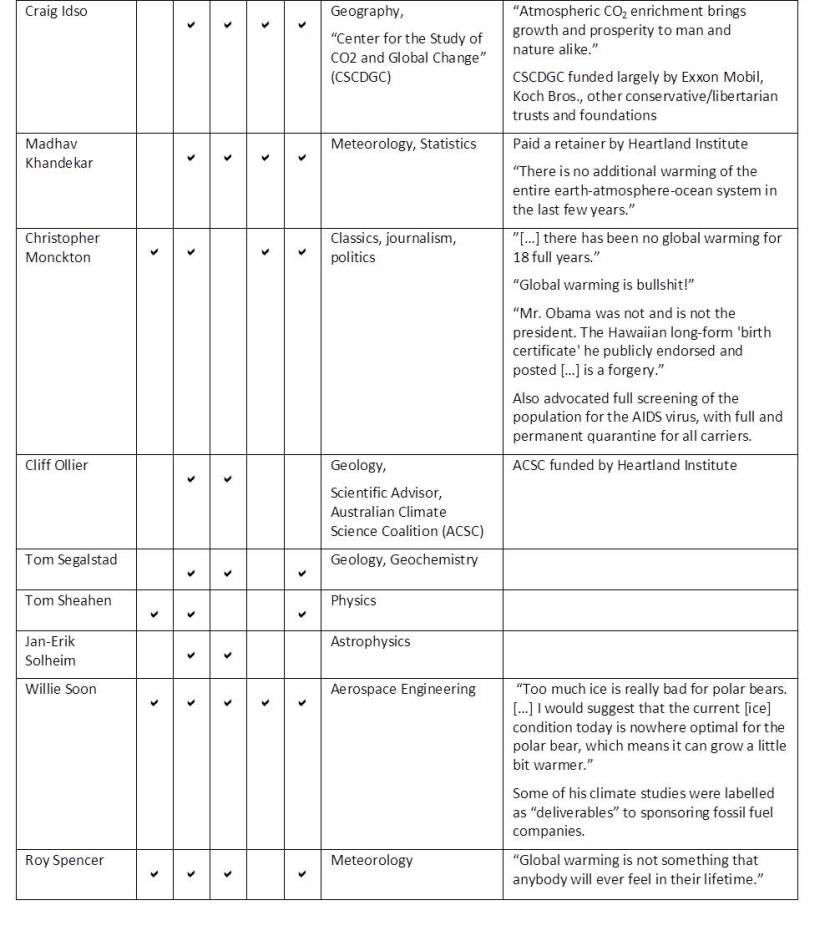 *Inclusion in the groups listed above

Of the 23 on this condensed list, a very small number actually have a background in climatology or climate science, even when we include those with a stint as a local weatherman.  Most have science backgrounds, but in a different field.   While they may be more qualified to comment on climate science than you or I, they cannot be called experts in the field.   It’s like going to an ophthalmologist for an opinion on your knee pain – better than asking a plumber, but I’d stick with the orthopaedic specialist.

16 of the 23 are affiliated with The Heartland Institute, a right wing libertarian enterprise whose mission is “to discover, develop, and promote free-market solutions to social and economic problems.”  The Heartland Institute aggressively promotes deregulation, as part of its aims of unfettered free enterprise.  According to various groups focused on transparency, the Heartland Institute received most of its funding through Donors Trust, an entity formed to obscure the money flowing to right-wing causes from conservative foundations.   Given the ties, it is entirely reasonable to say that the motivations of those on the list are suspect, and that deniers are driven more by political ideology than by good science.

If you can’t be right, at least be consistent.  The views expressed by these guys range from an outright denial that warming is occurring to a spirited support of the warming that is occurring and projected to increase.  Some of them are avid fans of CO2, even though that has been confirmed as a greenhouse gas.  We even have one guy who postulates that too much ice is bad for polar bears, so we should have less.   Scott, you chide climate scientists for some minor inconsistencies, but have faith in the credibility of these guys?  Really?

I put Fred Singer at the top of the list, as he has been at the forefront of climate science denial for decades.  He is also unapologetic about his previous roles in combatting tobacco regulation, and in denying links between UV-B and melanoma, and between CFCs and ozone depletion.  He believes in “free market environmentalism,” where environmental protection results from the application of market principles and incentives.   Fred is a serial contrarian, and to most of the world has minimal scientific credibility.  He’s trotted out as a thought leader, however, by the climate change skeptics and deniers.

Also deserving of special mention is Christopher Moncton, President of the new group backing full withdrawal from the Paris climate treaty.  Monckton is not a scientist, has never been a scientist, and is a well-known kook.  He has claimed that he has developed a cure for Graves’ disease, AIDS, Multiple Sclerosis, the flu, and the common cold.  He claimed to be a member of The House of Lords, prompting the clerk of the parliament to formally declare that he was not and to request that he cease and desist.  He has been caught misrepresenting scientific studies and falsifying and misinterpreting data, on numerous occasions.  Nonetheless, he was asked by Republicans to testify about climate change before committees of the US congress, prompting one (Republican) commentator to note that “many climate change contrarians will believe anything that seems to support their case, even if it’s coming from the most ridiculous source.”

Looking at this list, one can easily conclude that the most prominent climate change deniers are politically and/or ideologically motivated, and somewhat lacking of specialized expertise in the field of climatology.   However, they are the same people guiding the Scott Pruitts and Donald Trumps of the world.  They are, for the most part, unqualified and biased toward rejecting the science.  My guess is that they would likely refute any science that would result in any degree of government intervention in the economy.  However, in your blog you put a lot of stock in what they say.  You have to admit, Scott, that with any issue the credibility of the argument depends largely on the credibility of the arguer.   These guys just aren’t credible.

There are some in the discussion who are qualified, and have some reasonable questions about the scientific process and the consensus.  I’m not going to insult them by telling you to ignore their opinions, but you should recognize that they are a tiny minority – a minority that has failed to sway the consensus developed (and strengthened) over the past half-century.

James Baker: Head of the National Oceanic and Atmospheric Administration

Who benefits?  In this case, follow the money to confirm the goals of the skeptics and deniers.  Ask yourself who’s behind the denial and skepticism.

As reported by Jane Mayer in her book Dark Money, a Drexel University professor determined that between 2003 and 2010 over half a billion dollars was spent on what he described as a massive “campaign to manipulate and mislead the public about the threat posed by climate change.” The campaign was funded by some 140 conservative foundations, which distributed funds to think tanks, advocacy groups, trade associations, other foundations, and academic and legal programs.  As Mayer states, this represented a “campaign to undermine Americans’ faith in climate science and to defeat any effort to regulate carbon emissions.” The individuals listed above were central to this campaign.

You see, Scott – it really isn’t about the science at all.   Consider the group Americans for Prosperity, the political organization of the Koch brothers.  When AFP was heading a comprehensive effort to convince the American public that they should oppose any plans to combat global climate change, its President, Tim Phillips, was asked “Do you try to figure out if the science is real or not?”  Phillips’ answer was “No. Were on the economic side of things.”   That says it all – they don’t really care about the science, as long as it doesn’t cost people like the Kochs any money.

I hope I’ve tempered your view somewhat, and you no longer see the group of skeptics and deniers as some public-spirited group of professionals just trying to improve the science behind climate change.  Maybe now that you know a little more about the “other side,” you realize that their prime motivation is to attack and discredit the science, no matter how valid and widely-accepted it is.

I also hope that you’ll be a bit more concerned about combatting climate change.  We do not, as you suggest, have the technology to “scrub” the air of CO2.  Fixing the current mess is not a matter of waiting until things “break,” then enlisting the scientists to invent a “repair.”  It doesn’t work that way.  Besides, aren’t things already breaking?   Your fellow citizens think so – even with the massive disinformation campaign, 70% of US adults believe global warming is happening, and 58% are worried about it.  70% think it will harm future generations (Yale Program on Climate Change Communication).  Meanwhile, coral reefs are dying, glaciers are disappearing, and coastal cities like Miami Beach are regularly dealing with flooding by sea water.  Droughts across many areas of the world are becoming more severe.  Even Donald Trump is affected; his golf course in Ireland applied for a permit to build a wall – not to keep Mexicans out, but to prevent erosion “due to sea level rise.” 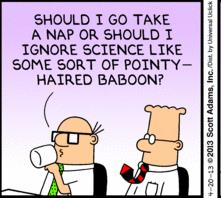 Scott, you distrust the scientists who are telling you that climate change is real, serious, and current.  But, you have great faith in the scientists who will develop solutions to climate change “after the fact.”  Sounds like you’re applying a principle I applied during much of my career – WWWD (What would Wally do?).  In this case he would lean back in his chair, have a coffee, nap a little, and leave the problem to be dealt with by someone else, at some other time.

Don’t be a Wally, Scott.   And have another go at the climate change commentary.

One thought on “Responding to Climate Science Skeptics: A Letter to Scott Adams”