“The superiority of his genius consists in nothing else but an inexhaustible fund of political lies, which he plentifully distributes every minute he speaks, and by an unparalleled generosity forgets, and consequently contradicts, the next half hour. He never yet considered whether any proposition were true or false, but whether it were convenient for the present minute or company to affirm or deny it…”

Hands up – who thinks this refers to one Donald J. Trump?

Wrong. It is not part of the flood of critical commentary on Trump’s well-documented history of half-truths, untruths, and total nose-stretchers.  It was not written about Donald Trump, or even written during Trump’s lifetime.  It is from “The Art of Political Lying,” an essay by Jonathan Swift published in November 1710 – over three hundred years ago.  Surprised? 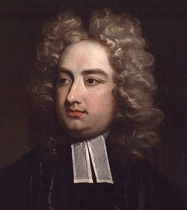 According to the Washington Post, during the first six months of his presidency Trump made 836 false or misleading statements – an average of 4.6 for each day.  That’s actually an improvement from his first 100 days, during which the daily average was 4.9.  But, things have recently taken a turn for the worse.  During one 26 hour period last week, in which the president attempted to turn a speech at a Boy Scouts jamboree into a political rally, held a press conference after meeting with the Prime Minister of Lebanon, led an actual political rally of his base, and continued his incessant tweeting, the Post counted 29 false or misleading statements.   That must be a new Trump record.

Sure, some of Trump’s lies are fairly innocuous, such as his bragging to the Boy Scouts that he was honoured to be speaking to the largest ever scout gathering. (It wasn’t.  What’s with Trump’s obsession with crowd size?).  Some likely betray an ignorance of facts, rather than an intentional misstatement of facts (example: claiming that under his leadership the US is becoming a net exporter of energy, whereas it has been since Obama days).  Some are downright laughable, such as his tweet claiming that Jared Kushner proved he did not collude with Russians.  The “proof,” in DJT’s mind, was that Kushner told the various committees investigating the matter that he “did not collude with the Russians.”  QED?

Unfortunately, a good percentage of Trump lies have a real and significant effect on the people who voted for him, are governed by his policies, look to him for leadership, and still hold him to the promises made during the presidential election campaign.   There were, for example, a few issues in the news over the past week or so where lies are important:

“We’re going to have insurance for everybody.”  “No one will lose coverage.”  “No cuts to Medicare and Medicaid…” “You will end up with great health care for a fraction of the price and that will take place immediately after we go in. Immediately! Fast! Quick!”

That’s what he said while campaigning.

Rather than pursue a viable healthcare plan, president Trump desperately wants to sign something, anything, that has a Republican stamp on it.  First came the House attempt at crafting a healthcare bill.  The House bill was praised by Trump as “wonderful,” even though it would have gutted Medicaid funding, resulted in tens of millions losing health insurance, and sharply raised premiums for seniors.  Once that bill died, he called it “mean” and urged the Senate to come up with something better.  They didn’t.

Trump praised the Senate attempts at a healthcare act too, even though the Senate versions wouldn’t have come anywhere close to fulfilling his promise of better, cheaper health insurance for everyone.  Now that the Senate has failed to pass a “skinny repeal” bill rolling back part of the Affordable Care Act, Trump threatens to continue sabotaging the ACA and individual Americans’ health care rather than admit to the lies.

“Thank you to the LGBT community! I will fight for you while Hillary brings in more people that will threaten your freedoms and beliefs.”  “I will do everything in my power to protect LGBTQ citizens.”

On Thursday Trump decreed by tweet that transgender military personnel would no longer be able to serve in the US military.  He claimed that he arrived at this position “after consultation with my generals and military experts.” That’s also a lie.  Secretary of Defense James Mattis had been given six months to look into such issues as transgenders in the military – he still had 5 months to go before offering up a recommendation.  Army Chief of Staff General Milley says he found out about the ban the same way most Americans did – via the news.  Joseph Dunford, Chair of the Joint Chiefs of Staff and as such the nation’s top military officer, hadn’t been consulted at all.

Also on the topic of LGBT rights, and also in a reversal of policy, the US Department of Justice weighed in on a case currently before the courts regarding workplace discrimination. Trump’s DOJ filed an amicus brief in a court case involving a worker fired because he was gay.  The DOJ argued that it was not illegal to fire the employee, as he is not, in the US government’s view, protected by anti-discrimination laws.   Thus, Trump government policy is that discrimination based on sexual orientation is perfectly acceptable.

The Russians Are Coming…

The fallout from the news of Donald Trump Jr.’s meeting with Russian operatives during the 2016 campaign continues.  Junior leapt at the meeting after being promised dirt on Hillary Clinton.  The subject line of his email inviting Jared Kushner to join in was “Re: Russia-Clinton – private and confidential”.  Kushner, however, claims that he just showed up at the meeting without any knowledge of who would be there and what would be discussed.  What – he was just there for free coffee and doughnuts?  Junior first claimed that there was no such meeting; when that lie became unsupportable, he claimed there were no attendees with any connection to the Russian government, then that there was no dirt provided.

How does this relate to President Trump’s lying?  It illustrates how pervasive the culture of lying is within the Trump circle.  Junior lied about having the meeting, who was there, and what was discussed.  Kushner likely lied about his attendance and participation, given that in the midst of a frenetic campaign period, a senior campaign advisor doesn’t just show up for a meeting without a clear understanding of the purpose and agenda and an assurance that his presence is required.  Trump supporters are so accepting of lying, a good many of them (45%) do not believe Trump Jr. met with the Russians, even after Junior himself admitted that he met with the Russians. And now, it appears that the public statement by Junior dismissing the importance of the meeting was actually written by President Trump.  This makes a liar out of the president’s lawyer, who has said repeatedly that the president was not involved in preparing the statement.

Conclusion?  Everyone connected with Trump lies.

Back to Jonathan Swift.  One of the relevant lessons from Swift’s 300-year-old essay is that lying for political purposes is not a new phenomenon.  Trumpian lying is hardly unprecedented – and this too shall pass.  Another takeaway is the sage advice provided in the following:

“…the only remedy is to suppose that you have heard some inarticulate sounds, without any meaning at all.”

Yes I know, Trump makes inarticulate sounds whenever he speaks words not written by someone else.  Seriously, though, Swift’s advice is that the only way to treat a man like Trump is to ignore him and his lies.  We can’t undo the experience of seeing Trump and his spokespeople blatantly contradict stated policies and promises, contradict each other, deny easily provable statements and/or events, and claim “alternative facts.”  We can, however, refuse to take the ratings bait.  In a Trumpian world where it’s all about ratings, perhaps it’s time to turn away.  Trump craves attention, but does not warrant attention.

It’s already happening – as Jack Goldsmith, Harvard Law Professor and former Defense Department counsel writes in Lawfare, “What is most remarkable is the extent to which his senior officials act as if Trump were not the chief executive.  Never has a president been so regularly ignored or contradicted by his own officials.”  I will add that never has a president deserved to be ignored or contradicted.  Sad.