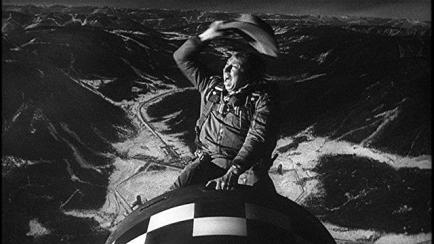 Donald Trump gets a new hat?

The editors of both the New York Times and Scientific American recently expressed their concerns about the fact that the US president can decide unilaterally to launch a nuclear attack against an enemy.  Since the Atomic Energy Act of 1946, the president can order a nuclear strike – alone.  That is, Donald Trump can exert sole control over a decision to unleash a nuclear arsenal against North Korea, Iran, or any other enemy state.  That should frighten everyone, for as Hillary Clinton pointed out during the 2016 campaign, “A man you can bait with a tweet is not a man we can trust with nuclear weapons.” Unfortunately, as Alex Wellerstein said in the Washington Post last year, the one sure way to keep President Trump from launching a nuclear attack would have been to elect someone else.

The concern about the president’s power to initiate nuclear warfare, and the dependence on the president’s stability and judgement in making such decisions leads to Harold Hering and “The Question” – a simple query made over 40 years ago about a hypothetical presidential order to launch nuclear missiles.

The case of Harold Hering has been getting a bit of attention lately. Hering is an 81 year-old former truck driver and addiction counselor.  In 1973, however, he was a major in the US Air Force, training for duty involving the control of nuclear missiles at a launch site.  He was on track for promotion to lieutenant colonel.  But, during his training, he asked “The Question.”  Hering privately asked his instructor “How can I know that an order to launch my missiles came from a sane president?”  The question was never answered.  Hering never completed his training – his inconvenient query resulted in the dedicated and experienced airman (several tours of duty in Vietnam) being dismissed from the missile class, and eventually led to his discharge from the military.  In the nuclear chain of command, there is no room for such a question – the mere fact that Hering asked it caused his superiors to doubt his commitment to following orders at a time of national emergency.

Hering would have been largely unaware of the mental state of the president at the time, but when The Question was posed, an unstable Richard Nixon was in the last days of his presidency.  Nixon’s increasingly paranoid and bizarre behaviour prompted senior cabinet members to subvert the usual chain of command to ensure safety.  Defense Secretary James Schlesinger, for example, circulated a secret memo instructing his commanders that any orders for a nuclear launch should be cleared through himself or the Secretary of State (Kissinger).   That communication was illegal, but necessary.

Hering had assumed that there were appropriate safeguards in the nuclear chain of command so that any one person (including the president) could not unilaterally order the launch of nuclear weapons on a whim, or during a fit of pique, or out of rage and spite.  He wanted to be assured, as his lawyer explained, that such an order would have come from a president who was not “unbalanced and berserk.”  Around the same time, Senator Alan Cranston of California was telling Defense Secretary Schlesinger that he was concerned about “the need of keeping a berserk President from plunging us into a holocaust.” It was not a trivial concern – Nixon had bragged to assembled congressmen that “I could leave this room and in 25 minutes 70 million people would be dead.”    He was often drunk at critical times, and mused about dropping nuclear weapons on Vietnam, saying to Kissinger “You’re so goddamned concerned about the civilians and I don’t give a damn. I don’t care.”

The question remains unanswered, and there have been no changes to the procedures or protocols for launching a nuclear strike since Nixon resigned.  Now we have Trump.  And there is still no assurance that a nuclear strike could not be ordered on a whim, or during a fit of pique, or out of rage and spite.

The safeguards that Hering assumed were in place to prevent individuals in the nuclear chain of command from “going rogue” include the Personnel Reliability Program (PRP).  The PRP is administered and overseen by the US Department of Defense, and:

In short, application of the PRP criteria limits involvement in any nuclear weapon-related function to persons judged to be reliable, sane, and balanced.

The PRP is comprehensive and broad in its application, covering all military, civilian and contractor personnel with duties relating to nuclear weapons and/or their components.  All personnel, that is, except the president.   The one person who can act unilaterally in ordering a nuclear strike is not subject to an ongoing evaluation of stability and competence.  That one person is Donald Trump.  And Donald Trump would likely fail the test.

Even republicans admit that president Trump shows poor judgement in many situations, is prone to outbursts of temper, acts vindictively, does not accept responsibility for failures, and is impulsive, arrogant and inflexible.  Senator Flake of Arizona noted that the president’s behaviour is “reckless, outrageous and undignified.”  All of these characteristics are disqualifying factors for certification under the PRP.  There have been very real concerns expressed about the president’s mental health – also a disqualifier.  And, consider Trump’s propensity to lie – dishonesty is noted as an indicator that the person is not suitable for certification.  Furthermore, PRP assessors evaluate financial aspects of a candidate’s life as an indicator of trustworthiness, stability, and potential for outside influence. Trump’s history of bankruptcies, lengthy list of lawsuits by suppliers for non-payment, and continued lack of transparency regarding his financial dealings would raise big (yuge!) red flags for any assessor.

Trump would fail the test put in place to ensure that the nuclear arsenal is in safe hands.  But, he still holds the reins.

During Nixon’s time, extraordinary measures were taken to keep the nuclear trigger out of the hands of an unbalanced president.  Those measures were likely unconstitutional and illegal. But, they were also necessary and effective. Since that time there have been numerous attempts to change the nuclear launch protocols and lessen the possibility of a president launching weapons recklessly.  Those attempts went nowhere.  Now that Donald Trump is in office, behaving in a manner that would otherwise disqualify him from being anywhere near a nuclear chain of command, these efforts should be revisited and redoubled.

The New York Times suggests that the president should be barred from launching a first strike without a declaration of war by Congress.  At the very least, any presidential launch order should first be reviewed by senior cabinet members.  There is precedent for this latter condition – Schlesinger’s 1973 edict established a temporary check on the otherwise unfettered power of the president.   So, why not make such a check permanent?  Even if Donald Trump is not (yet) in Nixonian territory with respect to his mental state, a future president may well enter that place at some time during his or her term. Why not take steps to prevent a catastrophe?

It appears that the Trump Whitehouse may already be operating under a Schlesinger-type edict, to establish some control over the unpredictable president.   Senator Corker, Chairman of the Senate Foreign Relations Committee, claimed that only Secretary of State Tillerson, Defense Secretary Mattis and Chief of Staff Kelly separate the country from chaos. One can assume that the cabinet trio is running interference for Trump, protecting Congress and the public from some of the president’s more outrageous outbursts and/or indiscriminate actions.  If the trio is in fact performing this function, then their de facto role in restraining the president should be codified in law for the most critical and consequential of all possible presidential decisions – the one to lunch a nuclear strike.

A law that would place reasonable restraints on the ability of a president to act unilaterally and cavalierly with nuclear weapons should be passed immediately.  I propose that it be named the Harold Hering Act.  The question Mr. Hering posed in 1973 would finally be addressed.