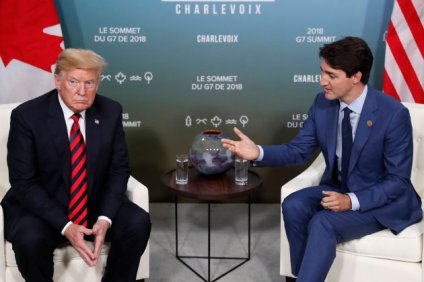 We’ll accept this agreement, but we should now seek to diversify our economy away from the US. Our neighbour claimed to be our friend, but tried to shake us down for lunch money. Now that he’s settled for just some pocket change, the relationship doesn’t go back to where it was. With friends like that, we need new friends.

A “good enough” deal for Canada

We in Canada woke up last Monday to find that the protracted negotiations with the US to replace the North American Free Trade Agreement (NAFTA) have, after 14 months of tumultuous and often acrimonious negotiation, produced an agreement-in-principle.  The new USMCA (Trump’s cumbersome name for it) is touted by Trump as “the greatest trade deal ever done.”  Others less prone to hyperbole and more educated on economic matters gave a collective yawn and wondered out loud, “is that it?” For the new agreement looks very much like the old agreement.  There is some adjustment to domestic content requirements in automobiles, some limited weakening of supply management protections of the Canadian dairy markets, and an increase of $20 in the limit Canadians can order from US online vendors without paying local sales tax.  Canadian dairy farmers are pissed off, but supply management survives substantially intact.  The head of Canada’s largest private sector union (which includes auto workers) supports the agreement.  For Canada as a whole, it’s not a great deal, but most Canadian observers are saying that it’s “good enough” given the challenges of negotiating a partnership with someone who doesn’t want partners as much as pushovers.

Nothing to gloat about, Donald

Although he gloats about the deal, Trump has achieved little net gain apart from the tweaking that everyone agreed was necessary in a 24-year-old pact that predated internet commerce.   Some of the deal’s major provisions, such as those affecting the auto industry, were agreed upon fairly early in the process and could have been rewritten without any drama.  But, Trump can’t seem to avoid confrontation or drama.  Meantime, the provisional agreement even falls short of the US’s stated objectives for the rewrite.  Before the negotiations started, the US Trade Representative publicized its requirement that the Chapter 19 mechanism for independent dispute settlement be eliminated.  It’s still there.  The US sought to eliminate barriers and limits to US agricultural exports into Canada, especially dairy products.  It settled for access to 3.6% of the Canadian market.  During the negotiations, Vice President Pence halted discussions by sending an ultimatum to Canada that the deal must have an automatic five year expiry. The provisional deal includes a 16 year sunset clause.  So where’s the big win? To the extent that the deal may include some limited benefits to the US (e.g. extended protections for intellectual property and certain classes of pharmaceuticals) those benefits are more than offset by the harm done to the US’s positioning as a reliable ally and partner.

The cost to the US – This won’t be forgotten

We have a deal, but what has the process of getting there accomplished? According to Bloomberg, not much in terms of getting a better agreement, but plenty in terms of creating “needless economic uncertainty and the trashing of America’s reputation as a reliable partner.”  Canada, its leaders, and even its negotiators have been insulted, threatened and bullied by Trump throughout the process.  Trump says that these tactics worked.  They may have forced a deal, but at what cost?  Trump might think the Canada-US relationship has survived 14 months of acrimonious discussions intact, but there’s a notable bitterness north of the border.  We don’t take kindly to being insulted, threatened and bullied.  Nor do we take kindly to being considered a “national security threat” when it comes to supplying steel and aluminum to the US market, resulting in arbitrary and odious tariffs.  Here’s what the Canadian Chamber of Commerce says about the new NAFTA:

“Canada must remember the lesson this turbulent period has provided: we must never again allow ourselves to be overly-dependent upon one trading partner. We must continue to diversify our markets to protect ourselves from capricious and unfair actions in the future.”

In other words, we’ll accept this agreement, but we should now seek to diversify our economy away from the US. Our neighbour claimed to be our friend, but tried to shake us down for lunch money.  Now that he’s settled for just some pocket change, the relationship doesn’t go back to where it was. With friends like that, we need new friends.

The US loses even more respect

At the press conference to announce the new NAFTA, Donald Trump proclaimed that “the United States is respected again,”  supposedly due to the bullying tactics that trade experts note are now part of the US “playbook” in pressuring other countries on trade.  That’s not respect; it’s fear – fear of a powerful body acting irrationally and counterproductively. Conversely, it leads to a loss of respect.

Several surveys conducted earlier in 2018 confirm that global approval of and confidence in US leadership has fallen to new lows.    Here’s the lead paragraph to the survey done by Pew Research, a very well respected, independent body:

“America’s global image plummeted following the election of President Donald Trump, amid widespread opposition to his administration’s policies and a widely shared lack of confidence in his leadership. Now, as the second anniversary of Trump’s election approaches, a new 25-nation Pew Research Center survey finds that Trump’s international image remains poor, while ratings for the United States are much lower than during Barack Obama’s presidency.”

How “poor” is Trump’s international image? Seventy percent of Pew survey respondents express no confidence in Trump to “do the right thing regarding world affairs”: even Xi Jinping and Vladimir Putin are held in higher regard.

Trump’s bringing his china shop into trade matters won’t improve the declining respect for the US and its leadership around the world.

And what about Canada, with whom Trump claims a “fantastic relationship” after having beaten up on its leaders and negotiators for 14 months, and while penalizing Canadian steel and aluminum companies under the guise of “national security?” Even before the trade deal was completed, Canadians were turning away from their erstwhile friend.  According to Pew Research, only 39% of Canadians reported a favourable opinion of the US when the survey was conducted in spring of 2018.  That’s the lowest level since Pew began running the survey in 2002.  It had previously been in the mid-60% range.  Confidence in Trump was even lower, at 25%.  Think about that – these numbers reflect the views in Canada that existed before the US arbitrarily imposed tariffs on Canadian products; before the president called the Canadian prime-minister “weak and dishonest”; before the US imposed artificial deadlines on the negotiations and threatened to ruin the Canadian auto industry if the Canadians did not meet their ultimatums. Hardly indicative of a “fantastic relationship” and the numbers are only going to get worse. No wonder we’re being advised to look elsewhere for partners and markets.

Donald Trump’s domestic approval rating, in a poll released this past week, is 41%.   The main factor keeping it that high is the US economy.  Yes the US economy appears strong, but it’s built on a platform of unsustainable deficits, income disparity, and tax-driven stock market valuations.  For the US economy to continue performing, it needs growth through trade.  Pissing off your main trading partners to the point that they feel forced to diversify their economies and markets is not a logical growth strategy.  Just sayin’.