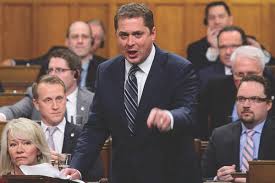 In Britain, Theresa May is trying to get the House of Commons to pass a Brexit agreement within the next three weeks, having been given a short extension by the EU.   She had a draft agreement – it was so bad that the Brexit Secretary, the man in charge of negotiating the agreement with the EU, resigned from cabinet because he “could not in good conscience” support the agreement he himself had just negotiated.   The withdrawal agreement has been overwhelmingly rejected by the House twice.  But, May’s only option is to keep re-tabling the same agreement, hoping that the House will change its mind. Remember that definition of insanity?

Meantime, companies in Britain are already packing up their bags and decamping to the continent.  UK consumers are buying “Brexit kits” in preparation for possible shortages of foodstuffs and other necessities.  And Conservatives are in open revolt against their leader.

Theresa May, upon hearing about Canada’s SNC Lavalin affair being labeled a “crisis,” snorted tea out of her nose and slapped Boris on the back.  “Oh my God,” she laughed, “They think that’s a crisis?”

In the United States, Donald Trump acts as though all three branches of the US government (legislative, executive and judicial) operate under his sole and exclusive direction, and according to his whim.  He spends much of his time trying to fight with a senator who’s been dead for six months.  The president’s priority issues include criticism of television comedy shows, support for his friends at Fox News, and reminders of how he won the election more than two years ago.  Meantime, the list of Trump associates heading to jail is growing by the week.  The net is closing in.  It is highly likely that within the next few months, Americans will have to determine whether their constitution allows for criminal charges to be laid against a sitting president.

So when Donald Trump heard that Canada’s SNC Lavalin affair was being labeled as a “crisis, he turned to Stephen Miller and scoffed, ”That’s a crisis?  Here, hold my beer.”

In Canada, Andrew Scheer, leader of the opposition Conservative Party, labels the whole SNC Lavalin affair as a “scandal” and a “crisis,” demanding nothing less than the immediate resignation of the Prime Minister.  Scheer says that Justin Trudeau has lost the moral authority to govern, has engaged in criminal activity in subverting the course of justice, and has overseen a cover-up of Watergate-proportions.

For the blissfully unaware, here’s a synopsis of the SNC Lavalin affair:

Q: Did the Liberals do anything illegal?

No.  No laws were broken, no-one pocketed any money, nothing threatened the political, economic, or social stability of the country, no animals were harmed.

Q: Did the Liberals do anything improper?

The trio had every right to talk to the AG about the SNC Lavalin case, and it would have been normal procedure for them to do so. Did they overstep the line from consultation to inordinate pressure?  She thought so; they didn’t.  It’s all a matter of degree, and of interpretation.

The PM’s actions, and those of the others involved, may have strayed into the realm of “improper,” but in no way constitutes a “scandal.”

Q: Why did those people resign?

The AG thought she was being compelled to act in a certain way by her boss and was being punished.  The Chief of Staff didn’t think so, but could not openly state his case while still advising the PM.  The civil service head realized that he could no longer perform effectively in his non-partisan role after he was the object of severely partisan attacks during his testimony to the Justice Committee.  The other member of Trudeau’s cabinet resigned in support of her friend.  All legitimate reasons.  A bit messy, but in no way evidence of a scandal or crisis.

Q: Then why doesn’t the PM resign?

Why should he? He was doing his job.  (see below)

Q: Why was a Deferred Prosecution Agreement suggested?

Since a criminal conviction would likely result in catastrophic consequences for the company (such as being disqualified from bidding on public contracts for 10 years), company officials and local politicians feared losing the company headquarters and/or thousands of jobs from Canada. A DPA would enable the company to avoid a criminal prosecution.

Q: Would a DPA let SNC Lavalin off the hook?

Nope.  It would still be subject to severe penalties. It would also have to prove that it had mended its ways and corrected any conditions/culture/structure that gave rise to the previous offense. Consider the case of Siemens, the colossal German firm, which in 2006 was accused of paying bribes to foreign government officials.  Under a Deferred Prosecution Agreement, the company paid approximately $1 billion in fines in both Germany and the US, and its operations remained under close governmental scrutiny.

Q: Was the DPA option introduced just for SNC Lavalin?

The Conservatives complain that the legal provision allowing DPAs was slipped surreptitiously into an omnibus bill, for the benefit of SNC Lavalin, without the knowledge and/or support of the opposition.  Here’s the truth:

Q: Was this a political act?

Of course it was.  These are politicians – it’s what they do.  Justin Trudeau was trying to preserve thousands of jobs in his home city and province. That’s his job.  Every MP in the House carries the same responsibility and political mandate – to act on behalf of constituents.  Anything an MP does or says is judged by how it might be viewed positively by his/her constituents, and lead to more votes.     That’s how it works.

Q: Are the Liberals favouring Quebec?

Westerners claim this is indicative of a Quebec bias of the Liberals. They think that Trudeau has not gone to bat for Western jobs in the same way, and has ignored the loss of thousands of jobs in the Alberta oil industry – resulting from collapsing oil prices and a lack of pipelines to export markets.  To which Trudeau could respond, “of course I step in when jobs are at stake – that’s why the Liberal government stepped in when the private sector didn’t, and bought you a $4.5 billion pipeline!”

Q: What would Andrew Scheer have done differently?

Not a thing – Andrew Scheer is a hypocrite.  While he’s busy frothing at the mouth screaming for Justin Trudeau to resign, he must be quietly admitting to himself that in similar circumstances, he would have done exactly the same thing.  If given a situation whereby a company in his home city or province was in danger of losing thousands of jobs, he would have pursued all legal avenues to protect those jobs.

If he wasn’t prepared to pursue legal avenues that would protect thousands of jobs, he would not be doing his own job as a Member of Parliament.  He would be voted out of office at the earliest opportunity.

Q: What would the Conservative Party have done differently?

Not a thing – the Conservative Party are hypocrites.  While now clamoring for Trudeau’s head, the party engaged in comparable actions while in power.  Anyone who believes this didn’t go on under every preceding government is hopelessly naïve, or an idiot.

Here’s one example – documents unearthed during a British investigation into Facebook’s operations showed that in 2013, Facebook investigated setting up a data processing centre in Canada.  But first, they had to have assurances that such pesky things as privacy guidelines and laws would not hinder their use of the data.  As part of a comprehensive lobbying effort, Facebook’s COO met with then-Industry Minister Christian Paradis, seeking a “letter of comfort” with assurances that Canada would not seek legal authority over data from non-Canadians stored on Canadian servers.

No matter that giving Facebook such legal assurance would have hamstrung the government (and future governments) with respect to privacy protections for Canadians; the Harper government produced the letter.  To do so, Harper et al sidestepped the normal bureaucratic channels – for instance using external counsel rather than Industry Canada lawyers – and cut one of Paradis’ staff out of the discussion entirely, because the staffer was proving to be a bit of a roadblock to their giving in to Facebook’s demand.

Facebook eventually decided to locate the facility in Iowa.  That’s irrelevant.  The whole episode shows that the Conservative leaders were quite happy to interfere in a matter that involved interpreting and/or applying the law, and to manipulate the civil service, in order to gain (in this case) a few hundred jobs.

Q: Why is this still an issue?

Because the opposition conservatives have latched onto this affair as an election issue – one that may leave voters disillusioned with the Liberals and their “sunny ways,” and more inclined  to vote Conservative in the October election.  Most Canadians, however, want to move on to more pressing matters.

God, no.  The Conservatives have shown that they are not fit to sit at the grown-ups’ table, let alone fit to govern.

In order to continue arguing about SNC Lavalin, they have resorted to such childish tactics as stomping feet and banging on desks to drown out the Finance Minister as he presented the government’s budget.  When that tactic had little effect, they took their balls and went home – walking out of the House and boycotting the parliamentary process.  They then decided to bog down the parliament by calling a vote on every single line item in the budget, requiring all parties to sit through all-night procedural sessions.  All that accomplished was to make MPs even grumpier.   For the Conservatives, it’s opposition through tantrums and sleep deprivation.

Please tell Andrew Scheer to shut up.  And to get some sleep.

One thought on “That’s it? Yet Another Take on a Canadian “Crisis””