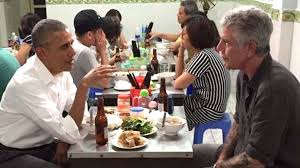 In May of 2016, Barack Obama took time out from an official visit to Southeast Asia to sit down with the late Anthony Bourdain in a tiny street café in Hanoi, to have a bowl of Bún chả, a bottle of beer, and a chat.  Obama was the president of the United States; Bourdain was the host of a renowned travelogue television show focused on food and culture, and a former chef.  Two middle-aged blokes sitting on plastic stools in a restaurant on the other side of the world, sharing a meal while musing about the simple pleasures of different foods, the benefits of making peace with former enemies (they were in Vietnam, after all), and of the need to connect with strangers in strange lands.  And, weighing in on such weighty issues as whether it is ever ok to put ketchup on a hotdog (apparently not).  Their brief chat spoke volumes about America’s place in the world. END_OF_DOCUMENT_TOKEN_TO_BE_REPLACED